Partway through 2016, after I had started this sketchbook and had begun to explore artistically with diligence again, I got my hands on the Mass Effect trilogy for PS3. I had heard much about it and it was on so many Top 10 lists in gaming circles, and though I was late to the party, I took to the franchise like an addict, mainlining all three games in succession and buying DLC like it was going out of fashion (I only stopped when I ran out of harddrive space). Inspired by the game, one day I sat down to experiment with designing my own alien species in a way I had never done before, from the bones up!

When I started this image, I drew a skull. It was a light sketch, and not purfecly three dimensional, but it served its purpose.  I built loose cartilage and fleshy structures onto it and slowly worked out the shape of the face, working thematically from the inside out. I say thematically because I can assure you I did not draw proper musculatureor calculate how deep the flesh should be.

I’ve always loved designing aliens. It is so much fun because, without something in the real world that its has to look like I have a much easier time making it look good. In truth, concept work and design is generally way more exciting to me than practicing techniques or getting used to drawing one character very well. I generally avoided that sort of practice and would move from one design to another. I now have an undeniable plethora of characters, but this is probably one of the reasons it took so long for me to grasp foreshortening.

Around this time I came up with Spider Slim, a former pool shark hell bent on revenge after being framed for a murder he didn’t commit and thrown into a hellish prison that forced him to become a hardened killer in order to survive. After being set free by a mysterious benefactor he would ravage Hong Kong’s underworld, seeking the answer to the mysteries of his incarceration.

Don’t mess around with Spider Slim…

In envisioning this character’s story I pushed myself further with my foreshortening attempts and planned images out more thoroughly before I attempted them.

I went through multiple revisions and sketches of the same ideas.

I even roughed out some pages, though I wasn’t working off of a script. 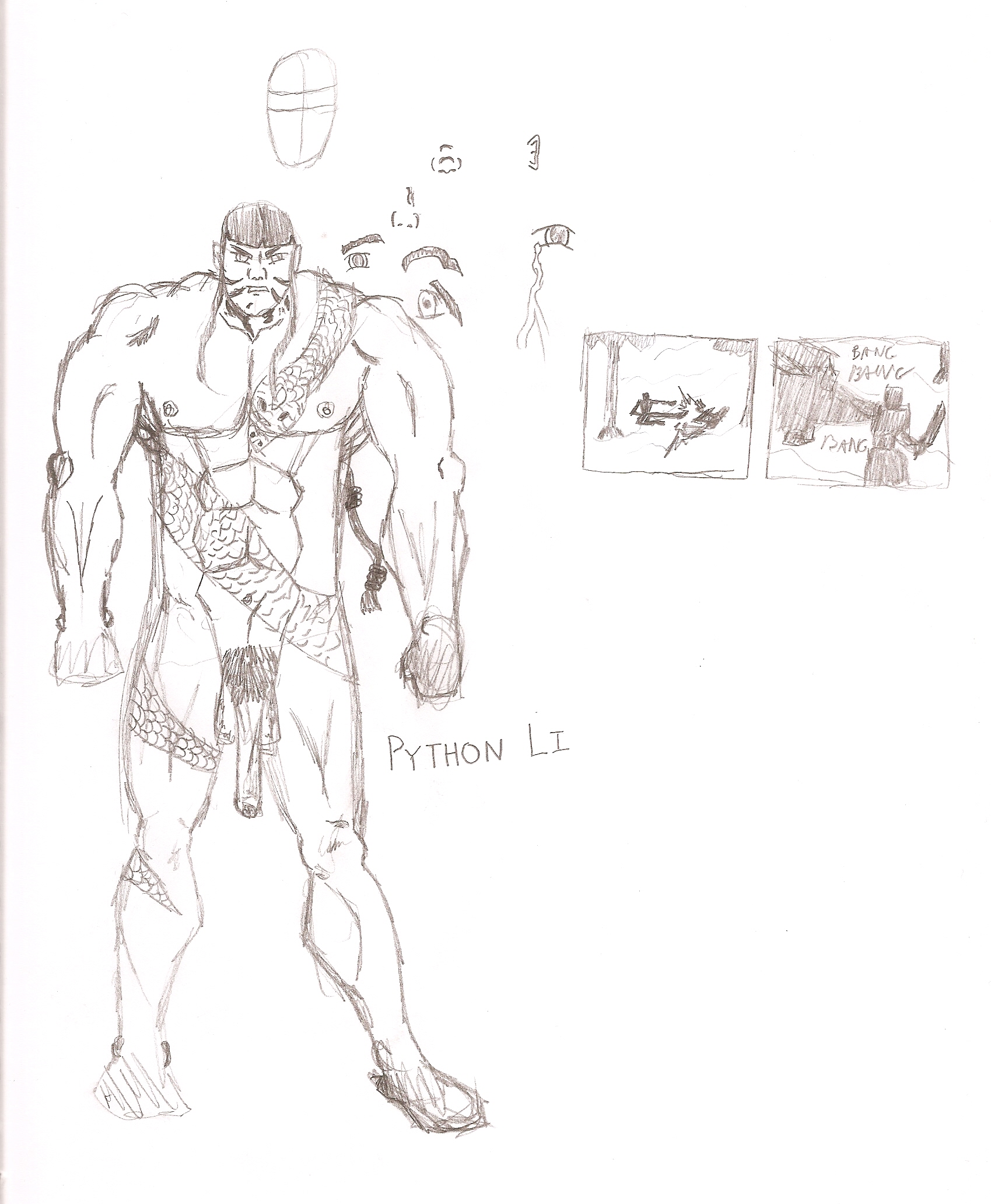 I wonder why he’s called “Python”?

And came up with some additional cast.

So much better than just a few years ago!

Leading to one of the most complete and complex images I have drawn to date, where i decided I wouldn’t let my self-doubt prevent me from trying things. While the story was incomplete, even from a basic plot structure perspective, the flaws in story did nothing to hamper my love of this character I created. While Spider Slim is not presently on the slate for a full comic, I wouldn’t be surprised if I come back to him in some capacity. I have a hard time letting go of characters and ideas, and an even harder time deciding on what I should dedicate my energies to working on in the immediate present.

Occasionally Slim pops up while I’m trying out new things and trying to improve artistically, which certainly cements him as a recurring character in my mind.

Not perfect, but we’re getting there…