As I further developed my foreshortening and anatomy skills, I started pushing myself to try new things with my art that I had felt were beyond me previously. I arrived at this idea of blocking out a specific space on the page and trying to use photo references to assist me in understanding how to draw things I couldn’t simply envision in my head. I know that photo references are one of the most utilitarian and ubiquitous tools in an artists employ, but I had struggled so much with making things look even remotely like photos I had referenced in the past that I had long abandoned them in favour of just designing cool costumes on static figures. Thankfully those days are over. 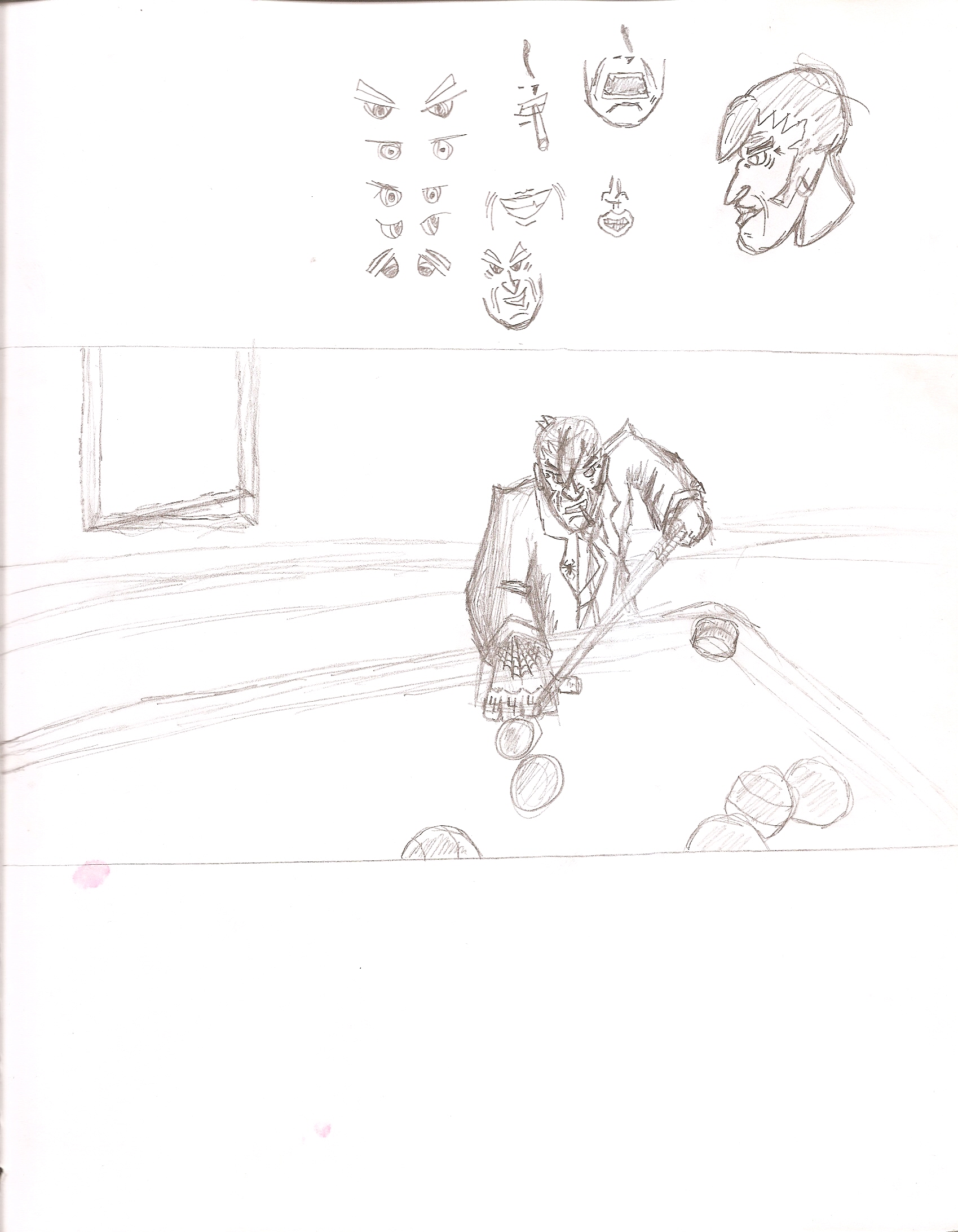 Those are some creepy lips in that profile up top…

This drawing of Spider Slim was definitely not the first one I did, I may have even put them in here in reverse order. I wanted to start with it because it isn’t terribly impressive to me. Furthermore, it betrays one of the difficulties I have with photo reference which is that sometimes I try to rigidly to capture a pose and then wind up with proportions not looking right. Recently I have been improving in seeing many different pictures in a place where I may have once only seen one. 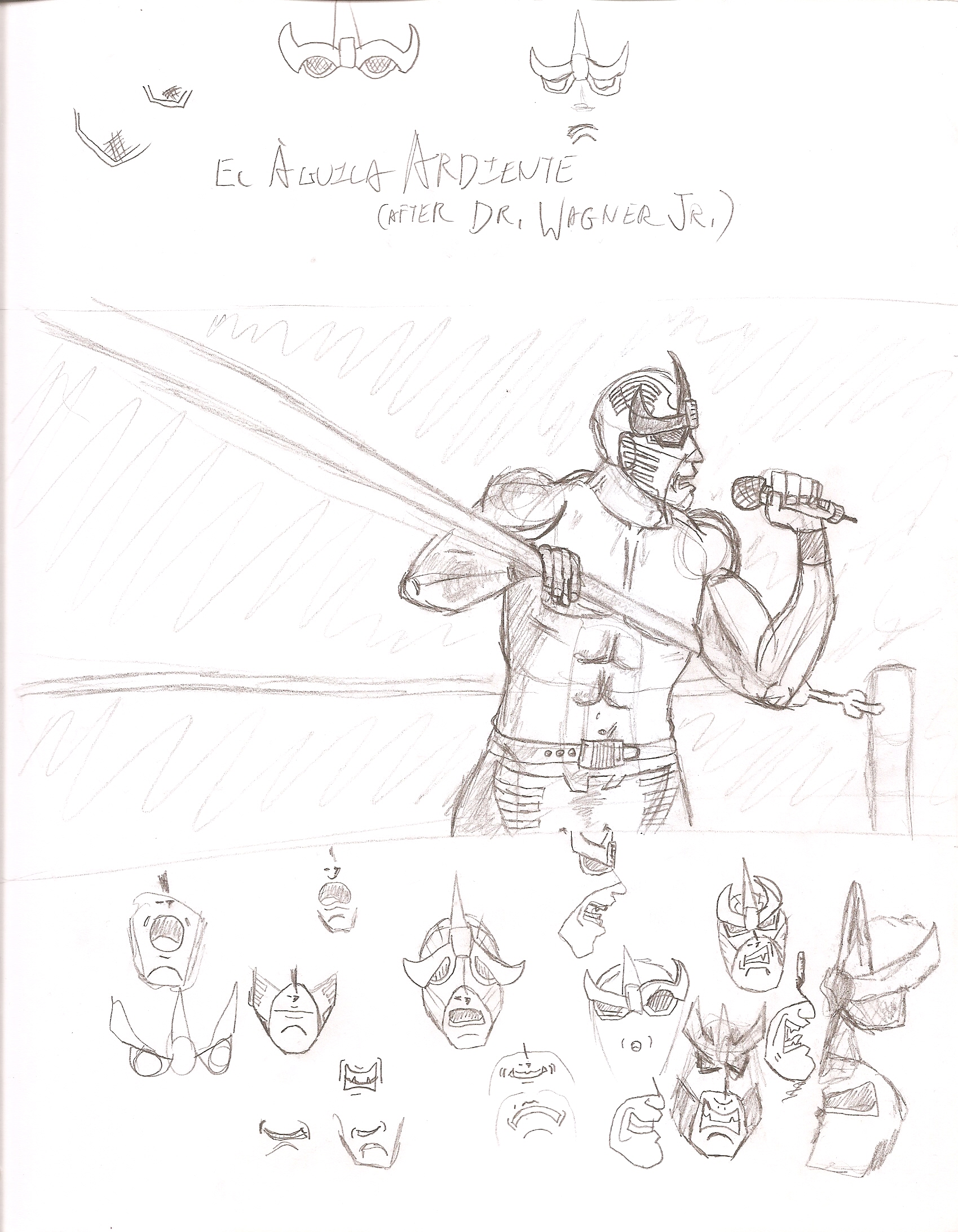 I told you in the first #SketchbookAdventures that it wouldn’t be the last time you would see El Águila Ardiente! As you can see, this was based on a photo of legendary luchador Dr. Wagner Jr. that I found online, as I have grown to see Ardiente’s body type as modeled on Wagner over the years. Again, even using reference, I wound up with two arms that look like they are remarkably different lengths… 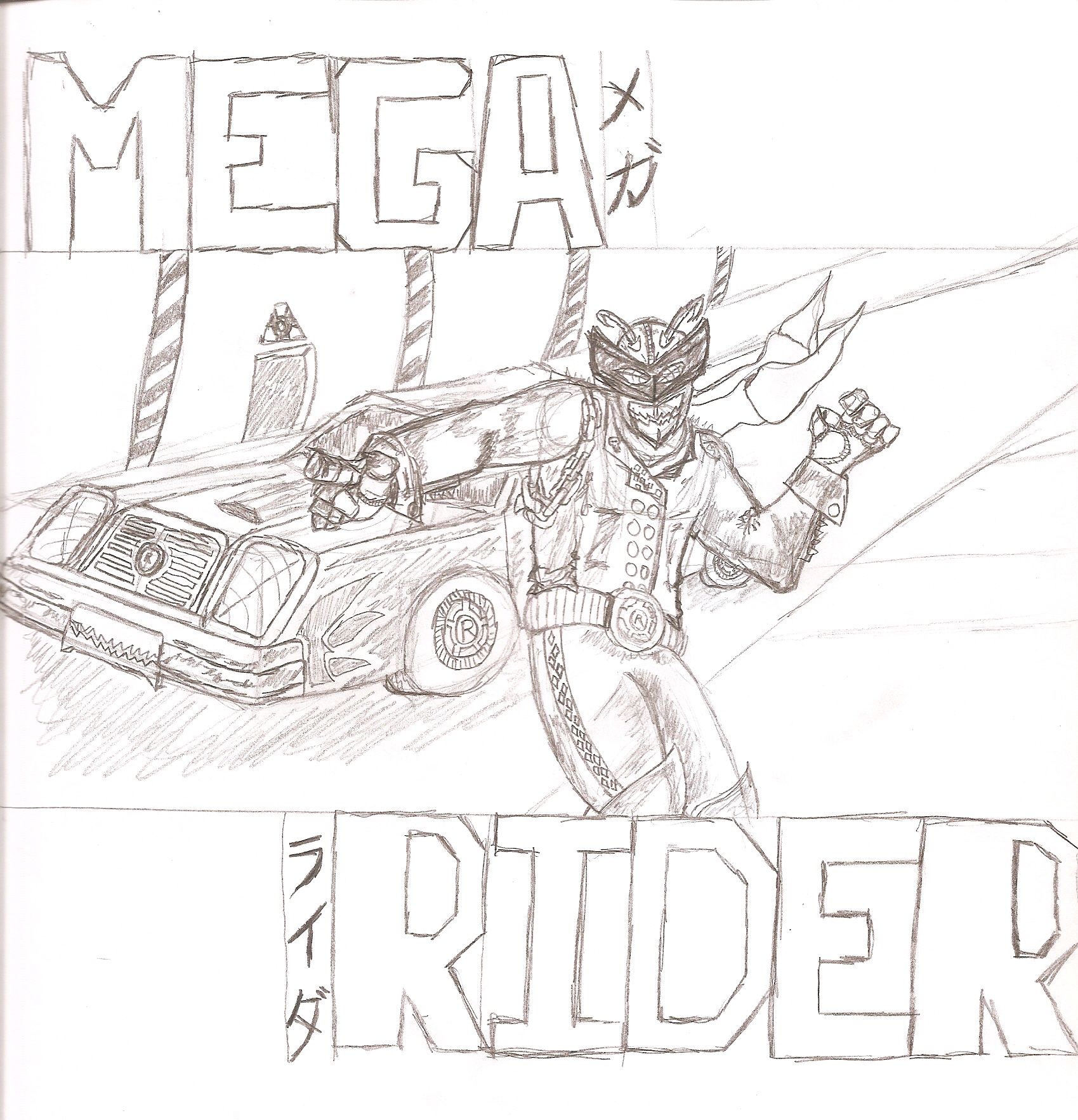 Would you believe cars are a lot harder to draw than you’d think?

Oh man! Mega Rider has been kicking around for years in my creative inventory and is my tribute to Tokusatsu and Kamen Rider, and the classic David Hasselhoff masterpiece Knight Rider. He’s simply just one of those characters I can’t let go of. He draws his power from the mysterious Mega Driver he wears on his belt and he must keep it out of the hands of the secret organization Leviathan. 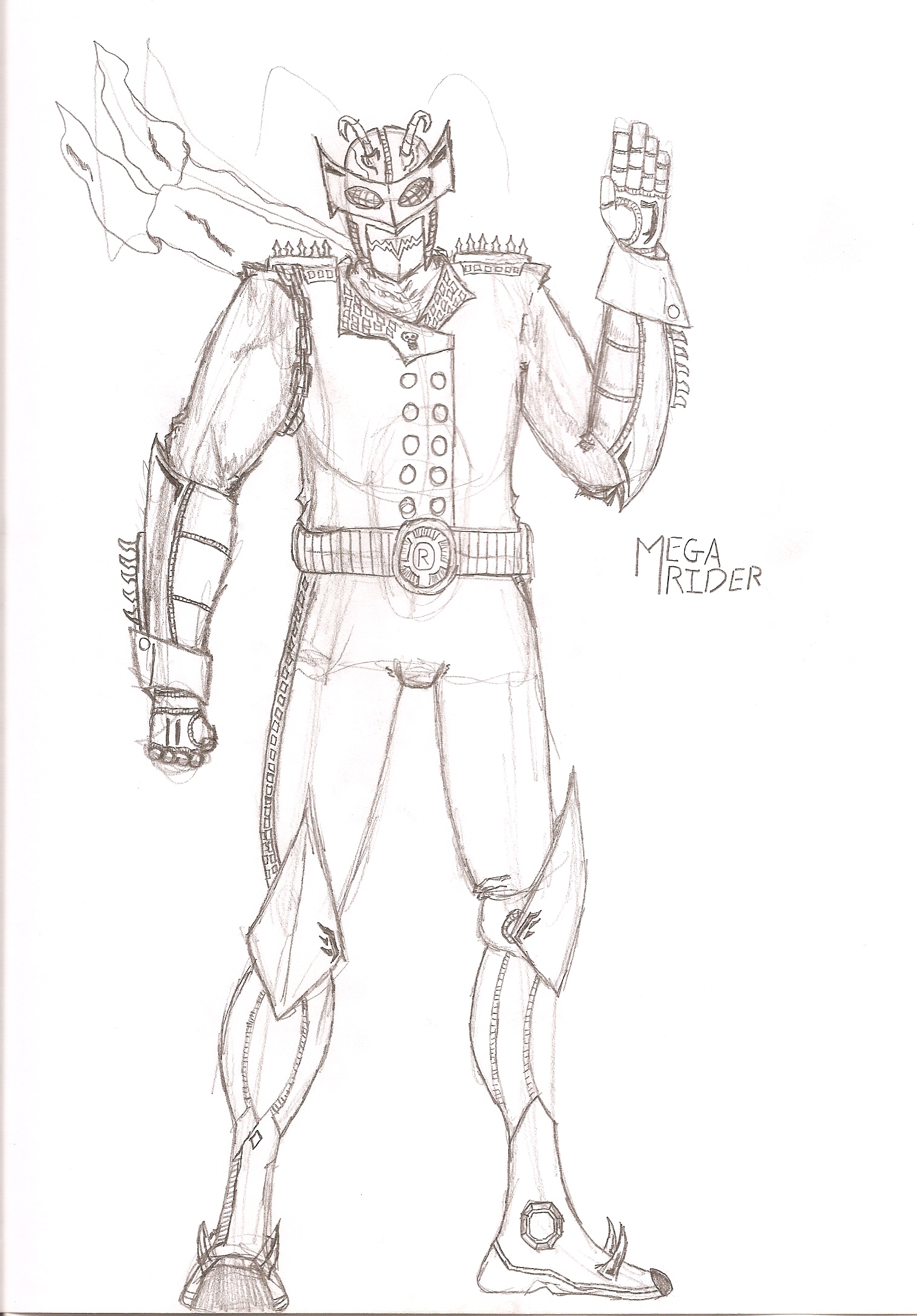 I’m not certain I’ve reached a final design for Mega Rider yet, but I think if you look at the progression of the design, the core components are all very well defined. This latest version is more armored, and as such more in line with modern Kamen Rider stylings, without dropping the leather biker aesthetic brought in by the Hoff and another Rider, the Ghost Rider. 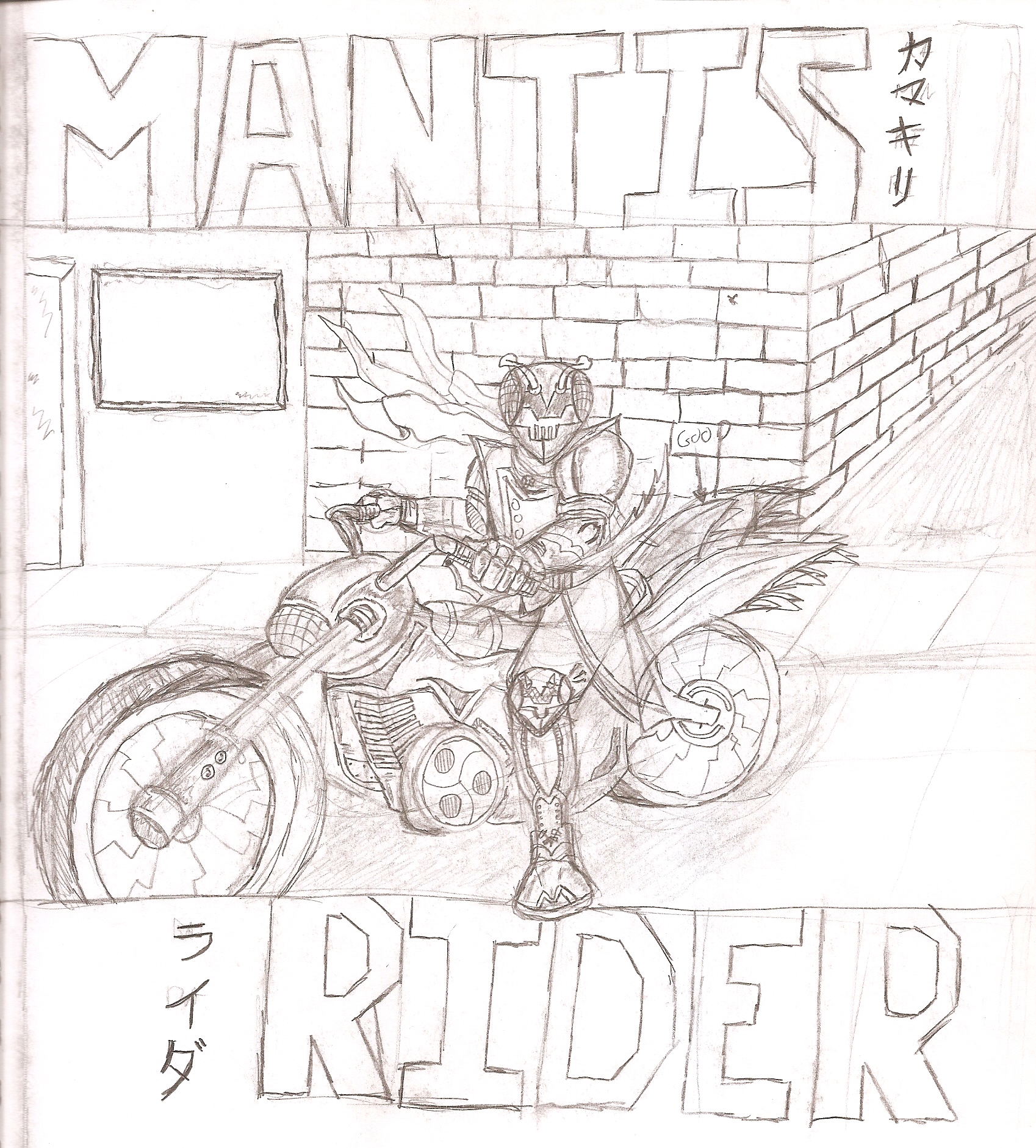 Mantis Rider is the  Proto Man to Mega Rider’s Mega Man. A brother and a rival, someone who works for the enemy, but whose motives don’t seem to align directly with theirs. I chose a mantis because, to me, they are the most iconic insectoid predators and I was already pushing the long-horned beetle motif with the design evolution of Mega Rider. Who is he and why is he hunting Mega Rider?.

This picture was my absolute favourite one from the several I did in this style. as I feel I challenged myself to draw many things I don’t have a lot of experience with. Not only did it challenge me, while not perfect, I certainly feel i rose to the challenge and learned a valuable lesson in pushing through things I have difficulty drawing. 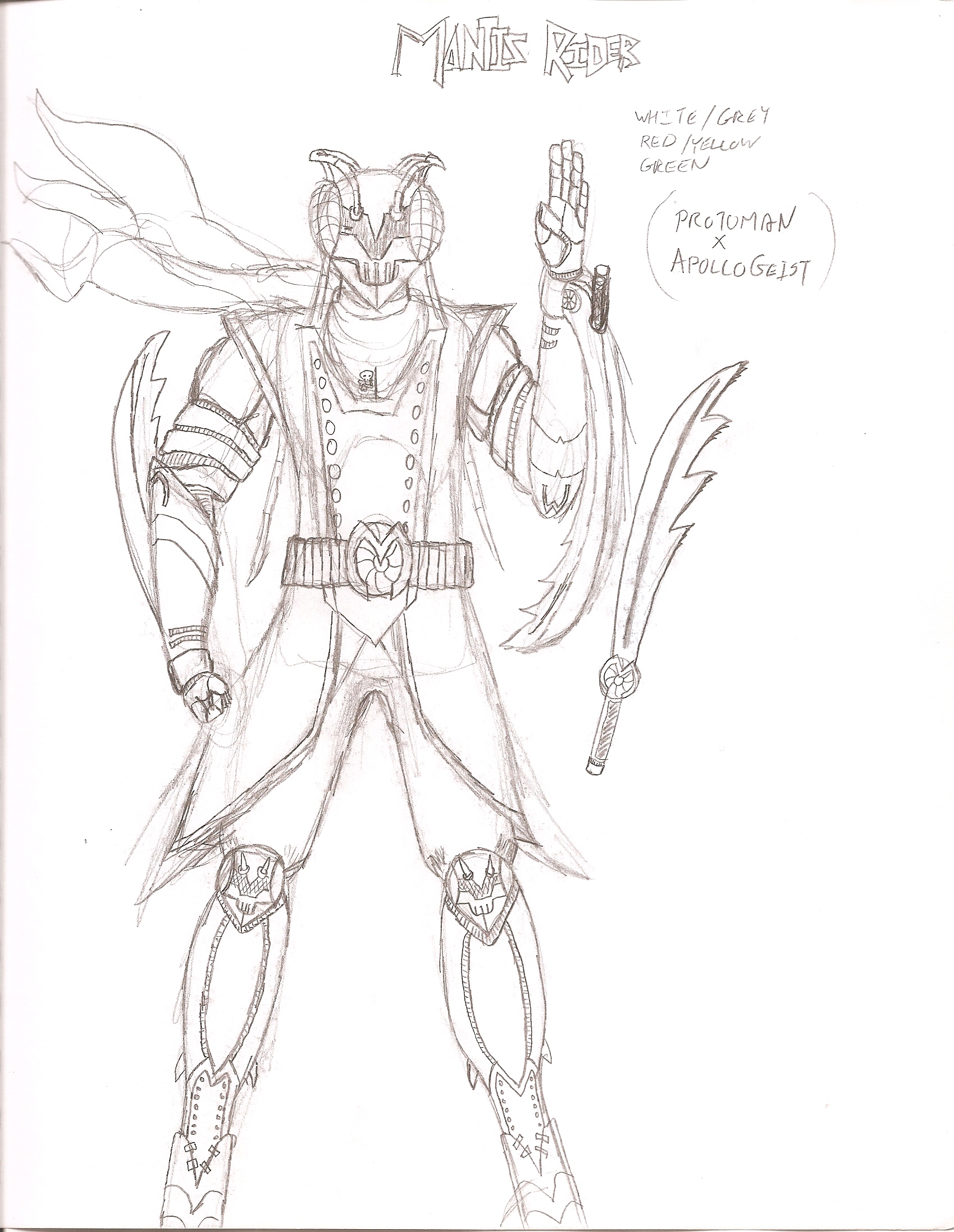 Looking at some of these, I might go back in and colour these up. I don’t know exactly what I was channeling when I did the design for Mantis Rider. Sometimes I just get an image in my head, fully formed and out of the blue. Like a glimpse of the true form of the design, and in true Platonic fashion, my hands have to try the best they can to approximate that perfection. 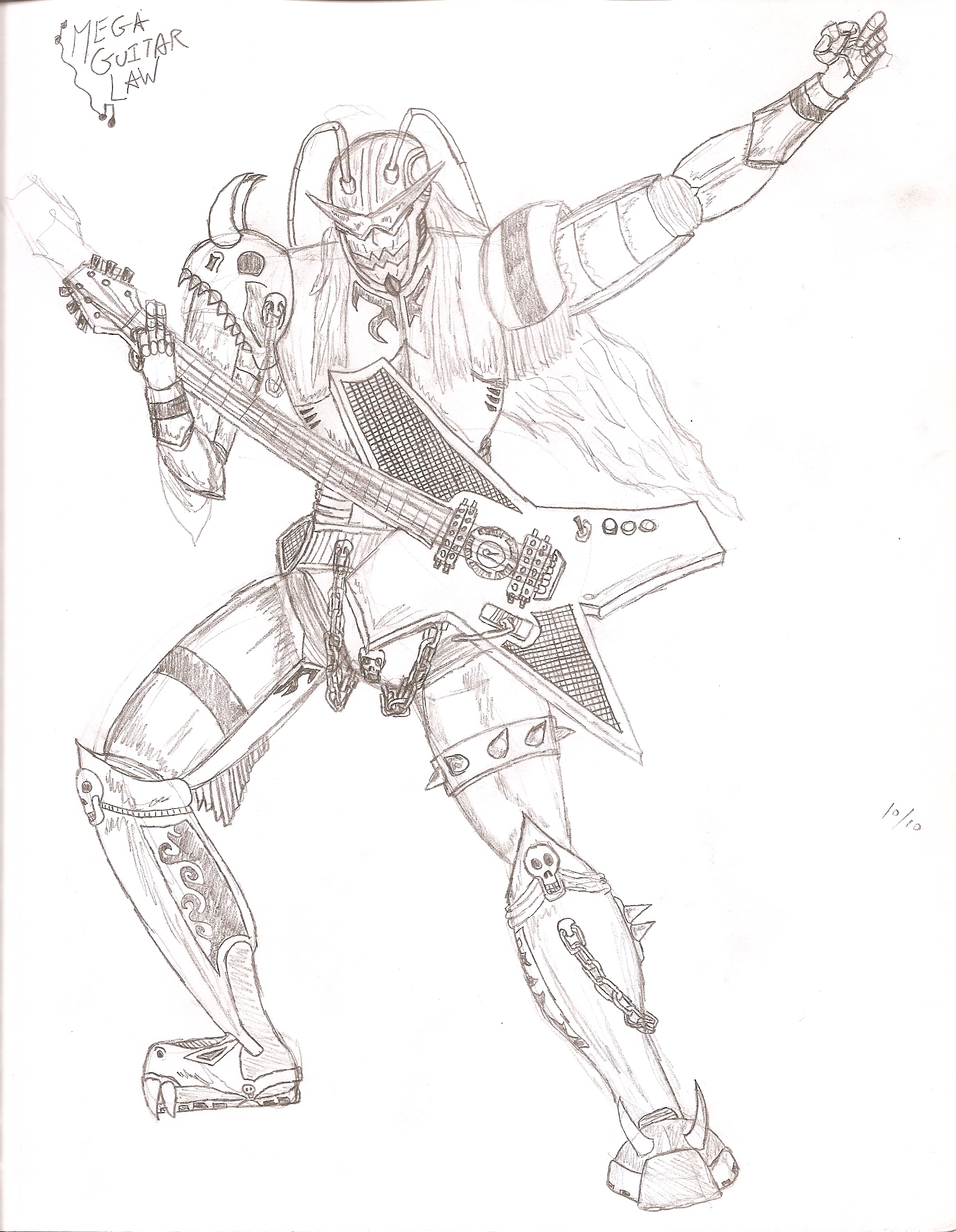 Probably one of my favourite designs ever.

This is Mega Guitar Law,  who exists in a far-flung future of the world of Mega Rider and Mantis Rider. His name may seem nonsensical, but that’s always been part of the charm of the idea for me. Mega Guitar Law started off as a story I made up while I played with my toys when I was much younger.I had taken a G.I.Joe, given him a jet-pack backpack and a Ninja Turtle’s Electric Guitar accessory, which in his hands was GIANT. So he had a Mega Guitar and he was dishing out Justice in a fight against a conglomerate that owned his city and their ban on arts and music. His Guitar is his weapon, attacking enemies with sound and the manifestations of the energy in the Driver built into his guitar, the same Driver once held by the legendary Mega Rider! Where did he get it? Who built it into a guitar? So many questions left unanswered!

Initially, as a youngster, I hadn’t come up with Mega Rider yet, and he did fight using his crazy guitar that let him use sound attacks and do other crazy things, but he also had a bazooka and laser rifle, which you can see have been dropped. Somewhere along the way I thought it would be cool to take the wacky concept I had with Mega Guitar Law and situate it firmly in a set of media that would relish in its wackiness while also letting it tell a dark and violent story, Tokusatsu!. Granted, mine will be a comic, but I’m talking about tropes and genres here.

In reinventing Mega Guitar Law I wanted to add in a female henshin hero, but never got past a very loose sketch for one. She was a vocalist with an Idol-meets-Metal vibe, a la Babymetal, added to her armoured insect suit. 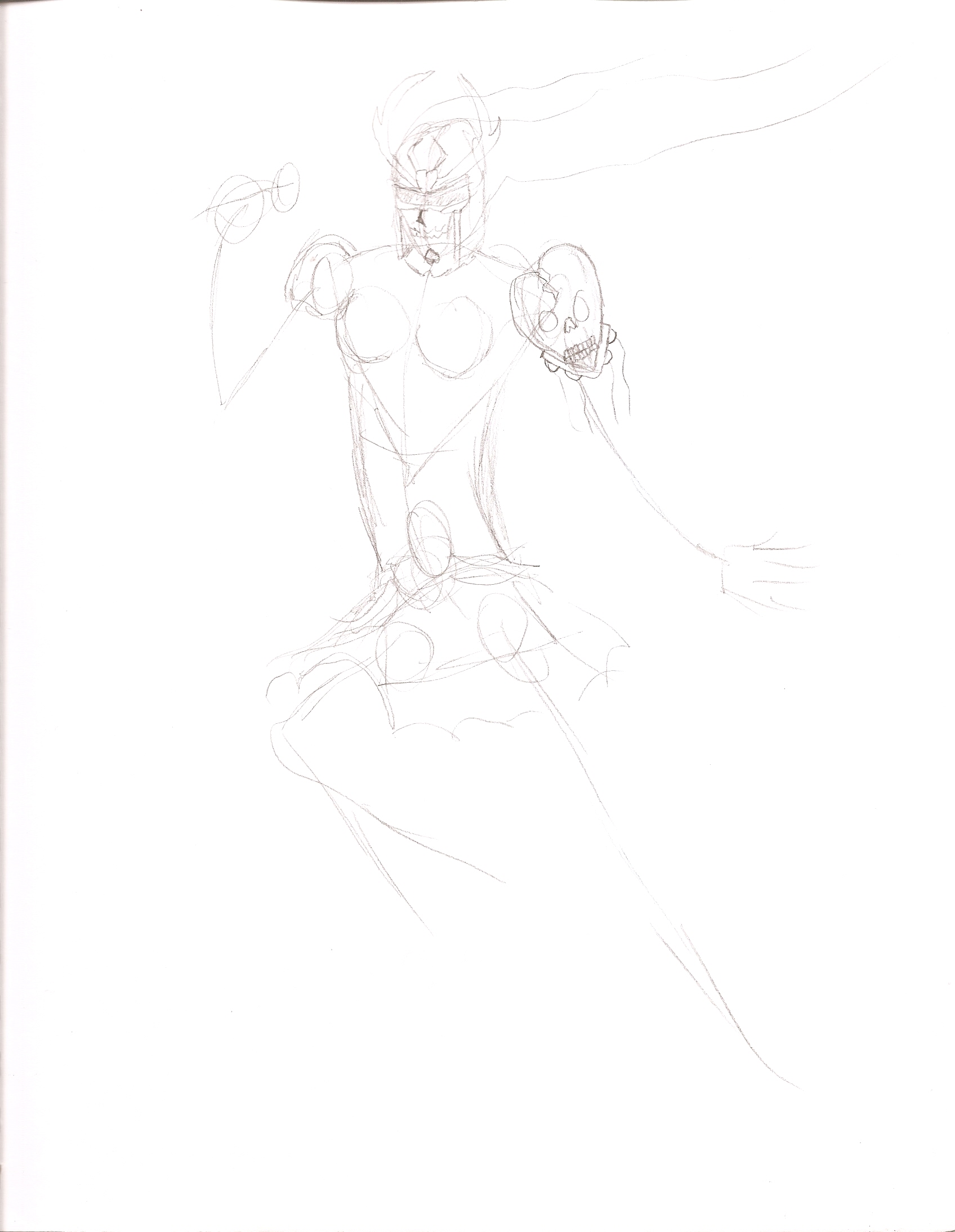 Whenever I go through older sketches that have so much story potential already invested in them, I want to work on their stories and play with their worlds. Staying on target and focused on one idea can be difficult when I keep working on ideas, old and new, in the back of my mind at all times. I’ve been thinking of doing a series of multiple “Issue No. 1s” to introduce a catalogue of worlds to my readers once I have completed the first major story arc of the project I am presently developing, a new series specifically designed to free me from much of the burden of an idea I have already invested too much into to just play around with, as a kind of “between-seasons” line-up.

Do you have any advice or questions? Please leave a comment here.