Okay, okay, I’m cheating here a bit. These are also from an old sketchbook, the same one my mecha drawings are from. It’s all years old content, but I needed to have an article ready for today and figured that I haven’t shown off much in the way of my fictional Pro-Wrestling universe. So, here’s a smattering of some interesting stuff I did. Most of them sort of have an overarching visual theme, so we’re gonna start with the odd one out. 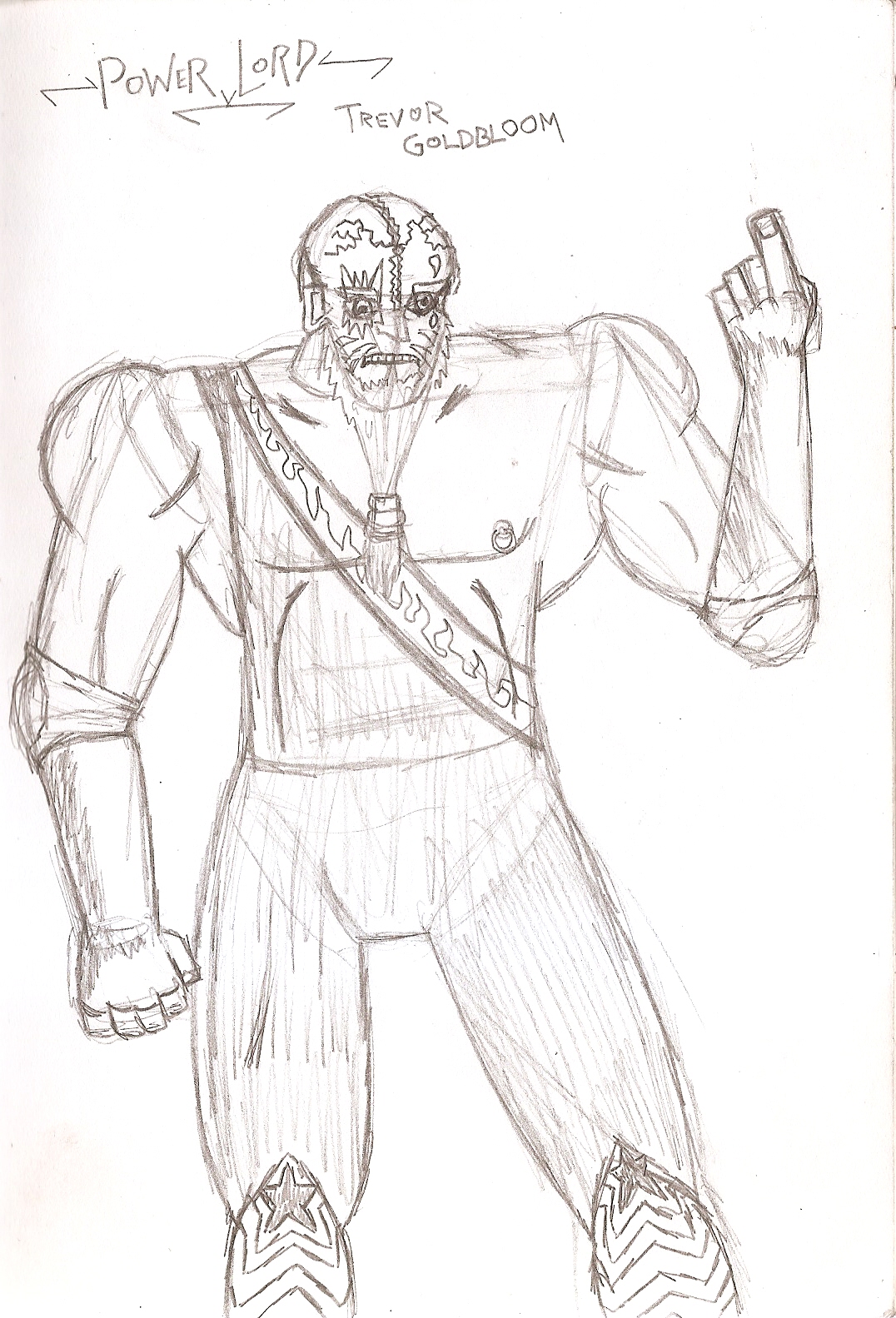 Around this time I was trying to figure out how to convey more personality in my art for the first successful time. Power Lord here could easily have looked better if drawn with more style, but the idea behind this pose was the big guy gesturing with one finger pose. It should have been more in front of him and more pointed towards the “camera” to really get the job done. I really love how wacky his makeup looks. 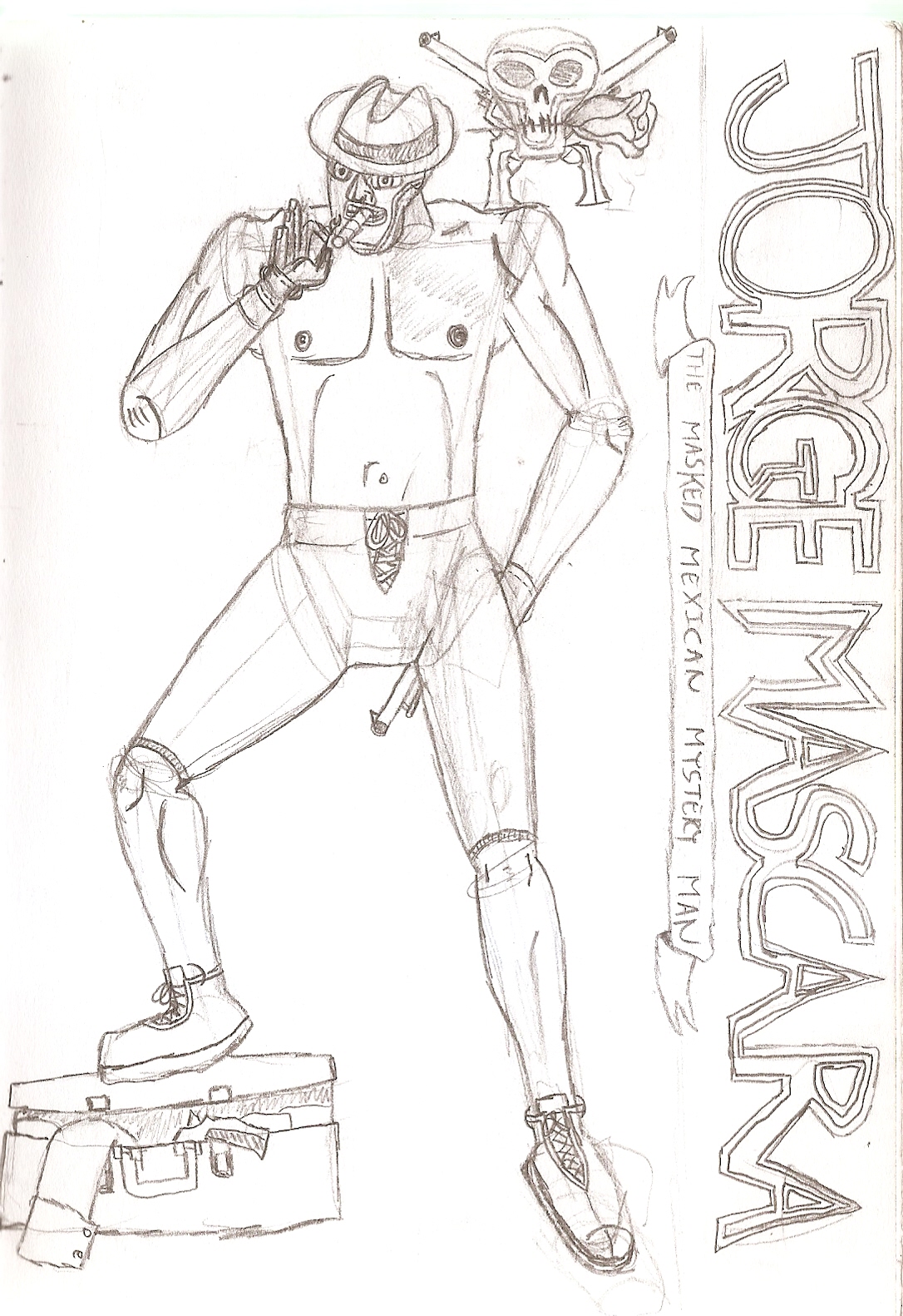 Believe it or not, this was a tremendous leap forward for me. Just trying to draw the head tilted and a body that was taking a distinctly non rigid position, trying to give him that suave and cool attitude of a P.I., seemed impossible at one time. Looking back at this I of course recognize that I failed in many ways to build proper anatomy and true foreshortening, but this was a step in the right direction. A step that would take many years to mature. I should probably draw more often.

Jorge here, unlike the Power Lord above, and most of the characters you’ll see below, is a big player in the mythology I am building. 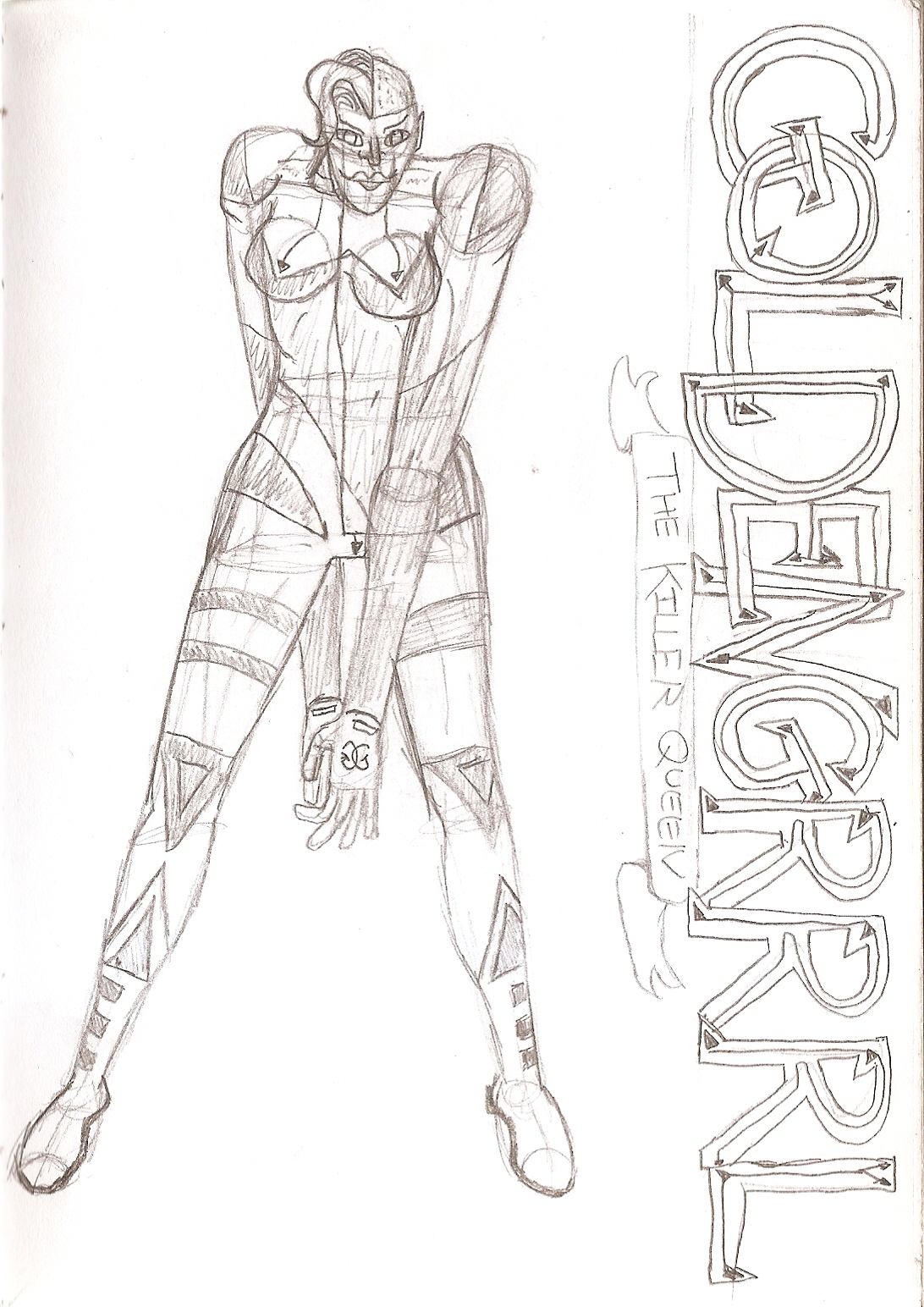 She’s dynamite with a laser beam.

GoldenGrrrl is me having fun with adapting Pro-Wrestling characters and archetypes from the real world through a different lens in my reality. She’s inspired by Golddust and is supposed to ooze with sexual danger and make people feel uncomfortable. I crafted her at the beginning of my desire to increase the number of female wrestlers in my story, and it has only grown to a level where I want to include even more, so I am certain that with the growing importance of that storyline I can find room for her to have a major role at some point. I chose her pose to try and make her seem weird and like Voldo from Soul Calibur. 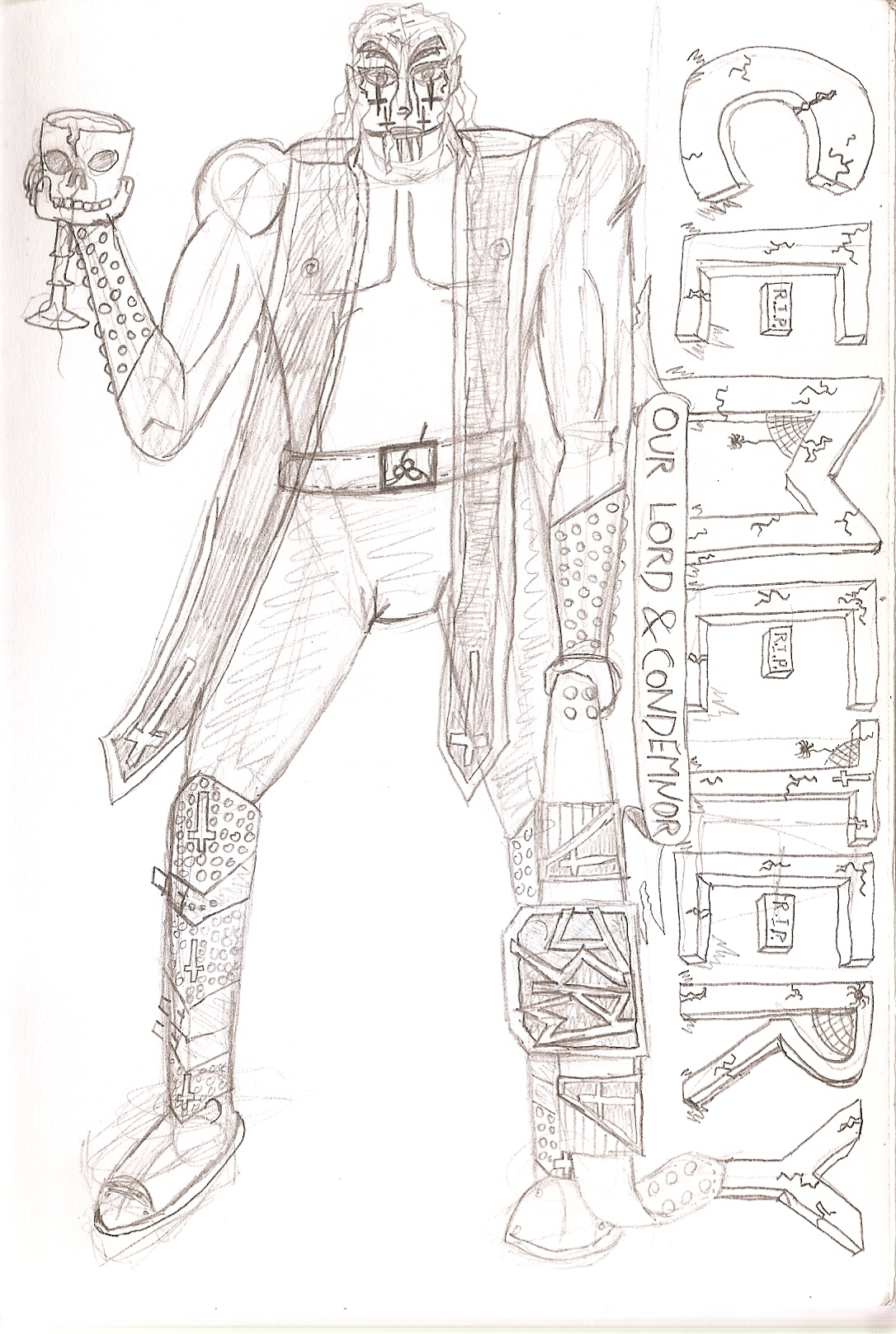 Somebody listens to too much King Diamond.

Cemetery is a major player in at least one storyline that dominates the cards of Jersey-State Pro Wrestling’s shows. While the time the major cast spend in JSPW is limited, the turmoil this Undertaker-meets-Raven-meets-Vampiro character and his Perverse Church faction create sends ripples through the fiction. I drew this around the time the E came up with their new belt design, and I liked it enough to model the JSPW belt after it. Heavy shading could have made this image seem more in character. 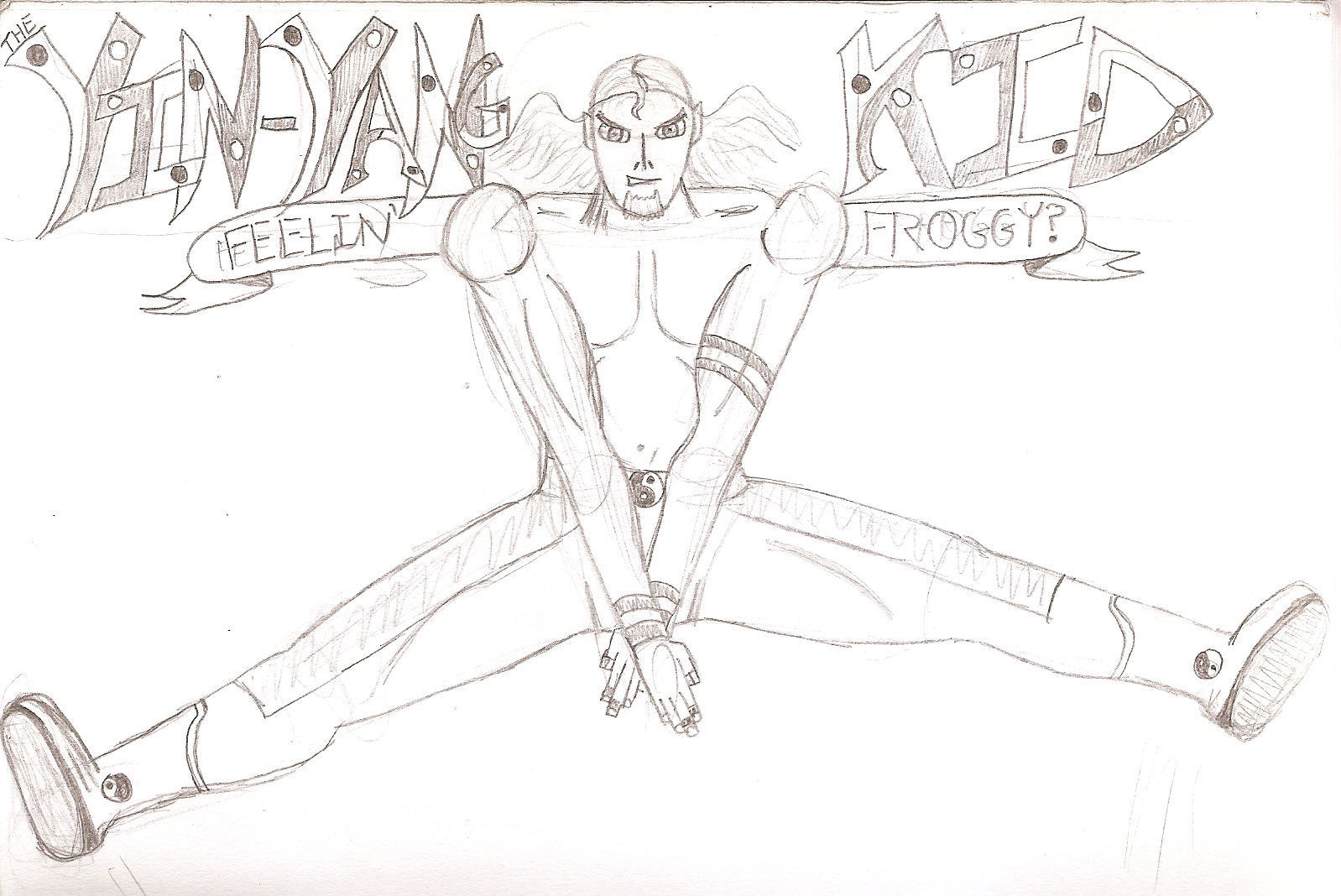 The Yin-Yang Kid here is sorta my world’s version of the 1-2-3 Kid if he were a bit more modern. Not much to say here with him except that the soles of boots look very bad if the boot doesn’t really resemble a foot shaped object. Also he looks like he broke his ankles somehow, that is not a natural bend. 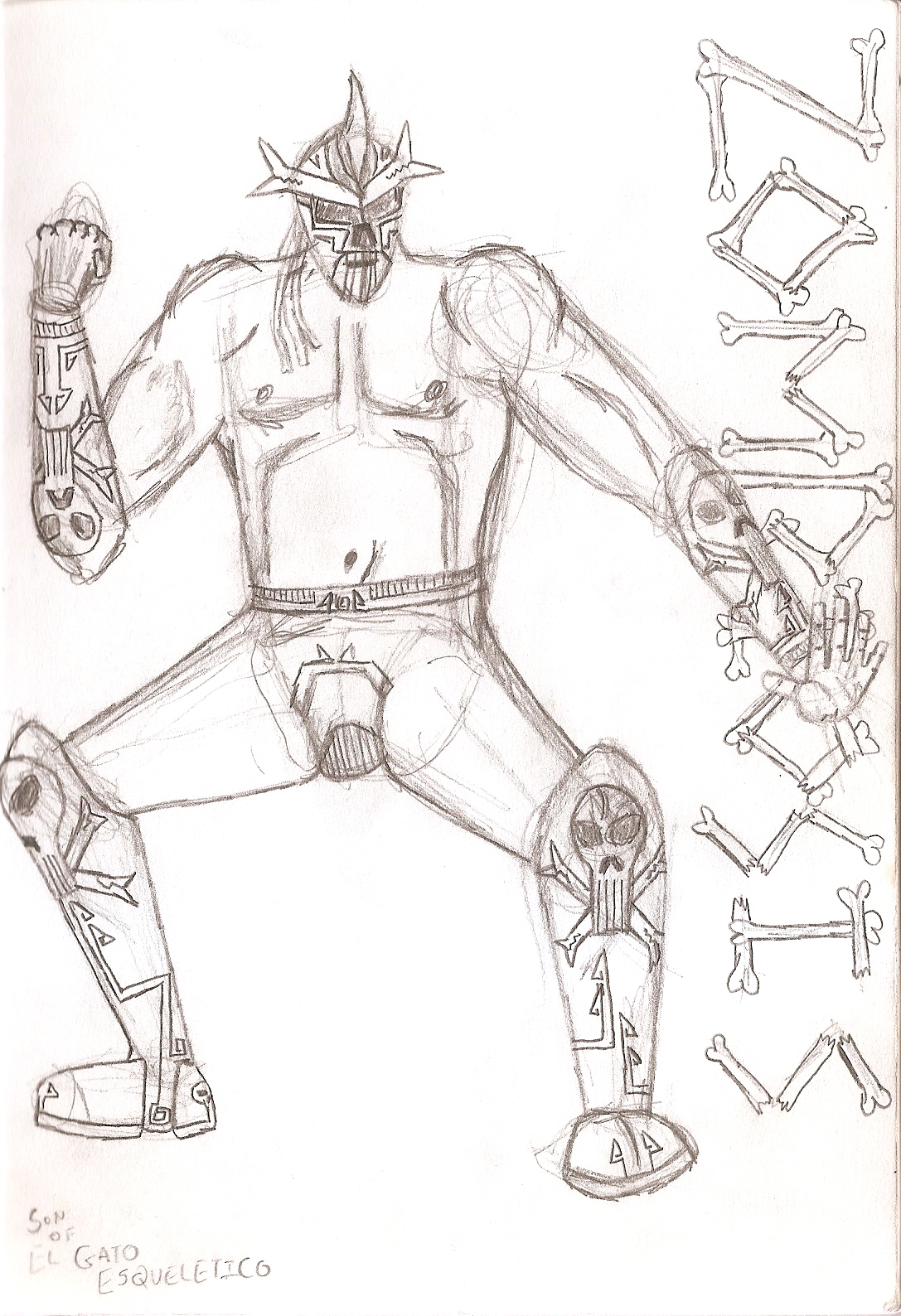 Damn, I love this mask design.

ZomBiosis here is, by far, my favourite drawing in the group and one of the cooler designs I’ve done for this world over the years. one of the 2nd Generation cast of characters, that will come into play as the story progresses a la JoJo’s Bizarre Adventure. His pose is probably the closest I came to understanding foreshortening for a long while. Like a brief glimpse of something I could get better at but still couldn’t grasp. that might be part of why I have such a fondness for the character. That and I wanna wear his mask,

Okay, so, there’s a glimpse into a large and complex cast of characters that I can never fully get away from and that keeps getting larger and more intricate as I plan it out. After all, I want it to be the best Pro-Wrestling comic ever. These characters should all, even if for just one panel or crowd scene, show up again. And I have some interesting plans for the TEW booking simulators.

Do you have any feedback or questions? Please leave a comment here.